Thank-you to everyone who joined us for Building Bridges, Connecting Communities!

Don’t forget to click here for the Program Book  to use as a guide for the event.

and the activists they honored.

You can click here for the lyrics to the Rebel Diaz performance!

In difficult moments we are tempted to give in to despair. This year, we have faced profound challenges across the globe. From homes to hospitals to cities and towns, the current health crisis and calls for racial justice have touched us all, but they also made more apparent the flaws of our societies. However, it is now that we must remember that we are a people of justice united by a common thread of hope. It is hope that unites us in our calls and emails to elected officials, in our protests on the streets. It is hope that connects us to our brothers and sisters in their struggles thousands of miles away. It is hope that connects us to neighbors in solidarity when we struggle. Our keynote speaker Sr. Maria Magdalena embodies this hope and reflects what CRLN’s friends, members and allies strive to live out every day. It is this hope that brings us together to commemorate another year of work for justice and to push toward the next. Responding to the Causes and Challenges of Forced Migration

Sister María Magdalena Silva Rentería – Originally from Zacatecas, she moved to Mexico City in 1982 to join the Josefina Sisters. During the earthquake in Mexico in 1985, she coordinated the shelters for affected people. She is a member of the national team of the Human Mobility Pastoral of the Mexican Episcopal Conference. Currently, she is the Director of CAFEMIN (House for Shelter, Training and Empowerment of Migrant and Refugee Women), as well as the Coordinator of REDODEM (Network of Organizations Documenting and Defending Migrants). 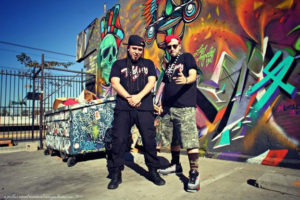 We are Rebel Diaz. Somos hermanos- RodStarz and G1- who grew up in Chicago and came up in The South Bronx. Somos hijos de political refugees from Chile who fled a CIA-funded dictatorship in the 1970s. Revolution raised us, and the culture of Hip-Hop provided us our own Nueva Cancion. We’ve been doing rebel rap since the Clinton era, sharing our story and those of our people; el barrio, the hood, the poor, los inmigrantes. Our bilingual sound has been shaped by pieces of South American folk, house, and latin percussion gettin down with boom-bap breaks and 808s. Hip-Hop and a vision for liberation have taken us around the world. With DJ Illanoiz and our band, we’ve rocked stages in front of thousands at festivals, and in front of dozens in squat house living rooms. We learned about tomas in our international tours, then came back to The Bronx, took over an abandoned building and started a community center, The RDACBX. We’ve given lectures at Ivy League schools but are college dropouts. We went from rapping about being ‘periodistas de la esquina’ to actually hosting a television news program on the global network Telesur English. We’ve been blessed to open for the likes of Public Enemy, Calle 13, and Rage Against the Machine. The New York Times, Washington Post, and NPR among others, have featured our work and words. Educators across the world use our music and videos as learning tools. Today, we continue in la lucha with our families and in our community through our music and multimedia work.