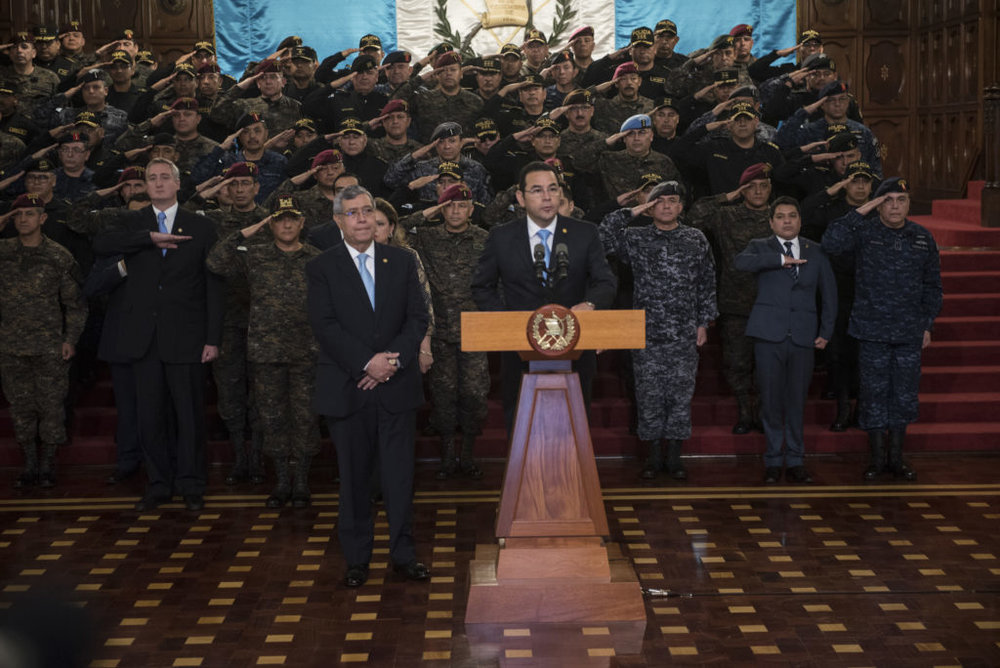 By Sidney Hollander, Secretary, CRLN Board of Directors

Guatemala is in the grip of a constitutional crisis that threatens to reinstate a regime of dictatorship and death squads supported by the U.S. government.

This is the message that was delivered to me and my fellow members of a CRLN delegation to Guatemala by a variety of human rights activists in January of this year.  Appalled by the looming threat to the modest progress toward righting the historic wrongs that continue to cast a shadow over public life in Guatemala, these activists deplored the recent U.S. retreat from its previous 12 years of support for the effort to bring justice to Guatemala and pleaded with us to help rekindle that support in the U.S. congress.

Because of the urgency and importance of this moment, explained below, CRLN is forming a Guatemala Working Group. Call the CRLN office at 773-293-2964 or email shunter-smith@crln.org if you are interested in joining a CRLN Working Group on Guatemala.

The United States, with a few notable exceptions, has been playing a relentlessly destructive role in Guatemala since at least 1954 when the CIA-engineered a coup that overthrew a democratically elected reformist regime because it was encroaching on U.S. business interests there.  In the ensuing maelstrom of repression and rebellion the U.S. allied itself with the Spanish-descended economic elite and its military, supplying arms and training in support of a barbarous genocidal counterinsurgency that destroyed 440 Mayan villages and killed over 200,000 people, nearly all of them civilians.

The heavy hand of the U.S. did not stop there.  When survivors of these massacres and related repressions sought refuge in the United States, the Reagan administration barred them, thereby inadvertently giving rise to the Sanctuary Movement of churches and synagogues that sheltered these “illegal” refugees in defiance of the U.S. government.

CRLN is a direct outgrowth of that sanctuary work in the 1980s.  Over the years it has continued to stand with Guatemalans in their postwar pursuit of justice and to call out the U.S. government when it impedes that work.

That is the background of the crisis that CRLN found during its January delegation.  The current constitutional crisis has its roots in the crimes of the counterinsurgency.  The long-delayed effort to bring the perpetrators to justice got a big boost about 12 years ago in a fleeting, breakthrough moment when the Guatemalan government, desperate for some measure of international and domestic legitimacy, agreed to cosponsor a United Nations Commission Against Impunity in Guatemala (CICIG, in the Spanish acronym).  Its mandate was to assist the Guatemalan Attorney General in the development of prosecutions relating to crimes from the past as well as from the present.  The U.S. supplied a portion of the necessary funding.

The CICIG has become a victim of its own success.  In its support of dozens of successful prosecutions of perpetrators of the genocide and of sitting politicians, including a sitting president and vice president, the CICIG has come to be seen as a threat to the allied business and military elites that have long dominated Guatemalan politics and government.  It was the 1970s and 1980s threat to this same elite that caused it to launch the brutal counterinsurgency, so it is no surprise that it has launched a counterattack on the CICIG.

The current crisis was precipitated by the present president of Guatemala who, along with his son and brother, has come under investigation and fears that they will be indicted for corruption.  He and his allies for some time have been attacking the CICIG as an agent of foreign powers that are compromising Guatemalan sovereignty.  They have even used high priced lobbyists to win the support of conservative politicians in the U.S.  These attacks came to a head late last year when the president declared that he was ending the mandate of the CICIG.

The resulting political crisis rapidly became a constitutional crisis when the Constitutional Court ruled that the president lacked the authority to terminate the CICIG unilaterally, the president defied the Court and withdrew police protection from the CICIG workers.  He then sought to indict and remove the Court majority on charges that they had acted against the law by ruling against him.   That is where things stand as of this moment in mid-February.

It is painful to report that the United States has jettisoned its 12-year support for the CICIG.  The State Department and the embassy have issued statements in defense of Guatemalan sovereignty and blandly said they favor the rule of law.  They have remained pointedly silent on the CICG, in contrast with the robust support they have voiced in the past.

Guatemalan human rights activists see the CICIG crisis as part of a larger drift toward dictatorship characterized by the reappearance of death squads, the criminalization of protest and opposition generally, and the subordination of independent branches of government to the control of the president acting on behalf of the old elite.  Emblematic of this drift is proposed legislation that would void the convictions that the CICIG has helped to obtain and forbid further prosecutions of crimes committed during the counterinsurgency, thus reinstating the impunity on which elite rule has rested.  In addition, a companion bill would subject nongovernmental organizations to onerous registration and reporting requirements and would outlaw many of their activities.  If this bill is enacted many of the groups with which CRLN works would find it difficult or impossible to operate, and individual activists would find themselves in even greater jeopardy than they are at present.

The awful developments in Guatemala create a particular moment for CRLN.  As members of CRLN we are not powerless to resist Guatemala’s slide toward dictatorship.  We must remain in contact with our partners there.  We must contact U.S. officials and other leaders.  We must spread the word so that our friends and associates in the U.S. can do the same.

Because of the urgency and importance of this moment, CRLN is forming a Guatemala working group.  All members are invited to join.  I definitely will be participating.  I hope many of us will.  We have a lot of work to do.

Call the CRLN office at 773-293-2964 or email shunter-smith@crln.org if you are interested in joining a CRLN Working Group on Guatemala.

1,773 thoughts on “Guatemala’s Constitutional Crisis: A Call to Action”

Pingback: hydroxychloroquine for sale over the counter

Pingback: can you take ivermectil daily

Pingback: is priligy safe for people

Pingback: how to use ivermectin pour