CRLN is seriously concerned about increasing levels of violent threats against the Lenca indigenous inhabitants of Rio Blanco, who have been resisting the illegal construction of a hydroelectric dam across a river on their lands. This is exactly the type of escalating threats that ended in the murder of Berta Caceres, so it is imperative that we act now. We received a request from the Civic Council of Popular and Indigenous Organizations of Honduras (COPINH) for international voices to add to COPINH’s complaints to the Honduran authorities about the threats and crops destruction and to ask them to act to protect members of the Rio Blanco community.. Apparently, the police have started accompanying armed men with guns responsible for the threats rather than arresting them.

“I am very concerned about the increasing frequency of violent threats by men with guns against members of the community of Rio Blanco, Intibuca, including death threats against the children of Francisco Javier Sanchez. Threats of increasing frequency preceded the murder of Berta Caceres, who worked with this community, so the threats must be taken very seriously. The community has identified one individual making threats–Franklin Madrid–and has asked for the authorities to arrest him and any others making threats. Instead, the police have accompanied those making the threats.The U.S. funds training for the Honduran police. If they are abusing their positions as law enforcement, they should not receive U.S. funds. Please call on the Honduran authorities to protect the lives of people in Rio Blanco by arresting and bringing to justice those who are harassing them.”

COPINH urgently communicates to the national and international community our serious worry about the defenseless state of the Lenca people in Río Blanco, faced with armed men and constant threats. We insist that the authorities take immediate action to protect the physical wellbeing and lives of COPINH members in Río Blanco, who continue to defend their ancestral territory against the invasion of people linked to the DESA corporation. 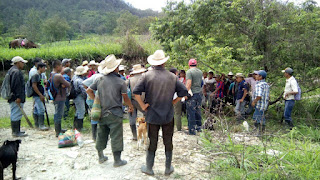 In recent months, and especially in the past few weeks, the threats against COPINH members have intensified, especially while they are working on their ancestral lands in Vega del Achiotal and Vega del Culatón, sites where the DESA corporation has invaded Lenca territory to build the Agua Zarca project.

The Madrid family, who is originally from Santa Bárbara, illegally took over Lenca territory and sold part of it to the DESA corporation. Several of these people have been employees of the DESA corporation and have been put to work threatening members of COPINH, including our sister Berta Cáceres. We remind you that one of them threatened that they were going to “set things straight with Berta one way or another” just a few months before her assassination, and they warned us to look out for the consequences.

We denounce that Franklin Madrid has pointed firearms at COPINH members in Río Blanco and fired into the air close to COPINH members while they worked their ancestral lands. The frequency of the threats is increasing and the COPINH members are in a state of complete vulnerability against the armed men who are openly threatening and intimidating them. Today, June 21st, in the morning hours, several armed men once again threatened COPINH members while they were working at Vega del Culaton. We alert you that one of the armed men threatened to kill at any moment the children of Francisco Javier Sánchez, Coordinator of the Indigenous Council of Río Blanco and member of the General Coordination of COPINH.

COPINH has filed complaints with the authorities regarding the threats and destruction of the corn crops. Nonetheless, to this day, those responsible continue to be free. Instead of penalizing those who make violent threats, the police have instead accompanied them.

We also denounce the responsibility of the Municipality of Intibucá for having illegally granted land rights on ancestral Lenca territory at the Vega del Achiotal, facilitating the invasion of Lenca territory.

We demand that the authorities take immediate action to secure the life and physical wellbeing of the Lenca people of Río Blanco and to resolve the situations denounced by COPINH. We call on the national and international community to speak with the Honduran authorities and embassies to demand that they Honduran state take immediate action and prosecute those who are threatening the Lenca people with firearms.

We demand immediate action before it is too late.

With the ancestral strength of Berta, Lempira, Mota and Etempica, we raise our voices full of life, justice, dignity, freedom and peace!