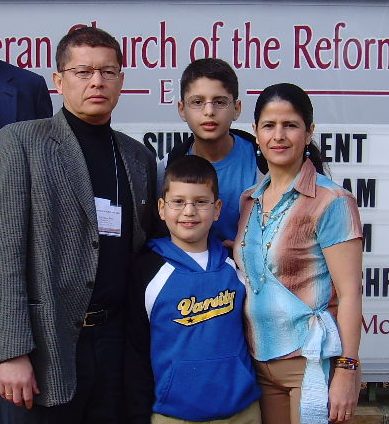 In response to all of this, CRLN has invited a dozen religious and human rights leaders to Chicago from Colombia over the last six years to meet with CRLN members, the media, and Congressional staffers.  In 2001, CRLN organized 12 of its members to participate in the historic Witness for Peace delegation of 100 U.S. citizens to Colombia to investigate the impact of the U.S. $1.3 billion “Plan Colombia”.  In 2003, CRLN also organized 8 African American leaders from Chicago to participate in a special Witness for Peace delegation to visit Afro-Colombian communities under siege.   In 2006, CRLN organized a 10-members delegation from the Chicago Presbytery for the 150th Anniversary of the Presbyterian Church of Colombia, a vital leader of ecumenical peace and human rights advocacy. To learn more about CRLN Delegations,
click here. Each year prior to key votes, CRLN members appeal to Congress for the protection of human rights, the removal of military and fumigation funds in the Foreign Aid Appropriation bill, and a reduction of U.S. troops & contractors deployed in Colombia.  Each week, CRLN interns and volunteers draft and fax letters on CRLN letterhead to government and military officials in Colombia responding to human rights urgent action alerts.

“I Will Never Be Silenced” Stories From Colombian Women ›

Pingback: how to get ivermectin australia

Pingback: how to order cialis

Pingback: where to buy ivermectin for humans

Pingback: what is cialis

Pingback: how do i get accutane

Pingback: where can u buy viagra