Ecumenical Tribute to Fidel (Audio in Spanish only) 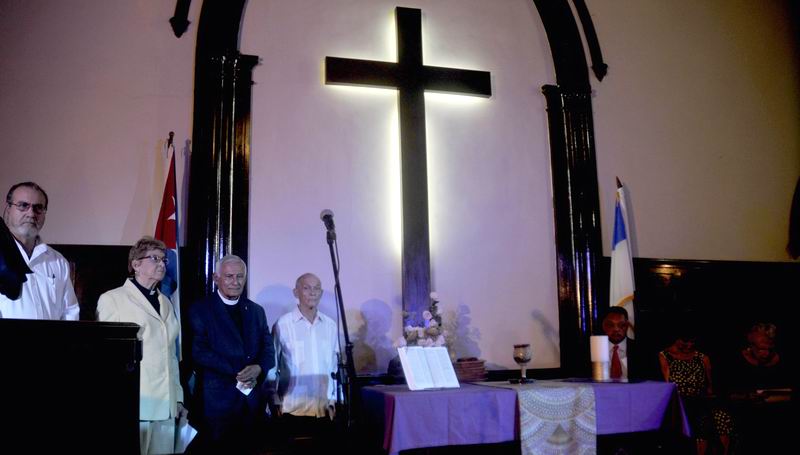 Ecumenical Tribute to Fidel (Audio in Spanish only)

A moving ecumenical tribute for Commander Fidel Castro took place in the temple of the First Reformed Presbyterian Church in Havana. With the lyrics and music of Raúl Torres’ most recent song “Riding with Fidel”, the procession entered with a light, the Christian flag, the Bible and the banner of the solitary star.

After a moment of silence and the National Anthem, the tribute of the Council of Churches of Cuba and the ecumenical movement began for the leader of the Cuban Revolution.

Rev. Raul Suarez, Director of the Martin Luther King Center, called for unity of the nation.
The American Reverend Joan Brown Campbell, who for ten years was Secretary General of the National Council of Churches of Christ, where she played an active role in fighting for the return of the child Elian Gonzalez, said that Fidel will always be with us.

Reverend Joel Ortega Dopico, President of the Cuban Council of Churches, referred to the immense challenge of living without Fidel being physically present.

Other religious leaders of Cuba and the U.S., including the Rev. Jesse Jackson, expressed dismay at the physical departure of Fidel Castro.

As Reverend Odén Marichal, Coordinator of the Cuban Interreligious Platform expressed, “before we had Fidel, now Fidel has us.”

3,922 thoughts on “Ecumenical Tribute to Fidel (Audio in Spanish only)”

Pingback: what is dapoxetine

Pingback: how much is viagra in usa

Pingback: sildenafil uk over the counter