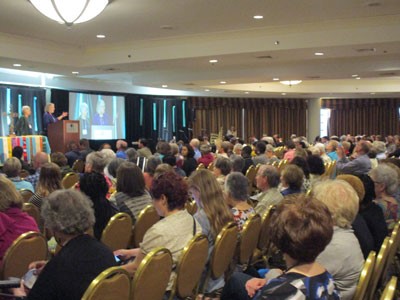 “CRLN builds partnerships among social movements and organized communities within and between the U.S. and Latin America. We work together through popular education, grassroots organizing, public policy advocacy, and direct action to dismantle U.S. militarism, neoliberal economic and immigration policy, and other forms of state and institutional violence. We are united by our liberating faiths and inspired by the power of people to organize and to find allies to work for sustainable economies, just relationships and human dignity.”

Workshops updated us on the challenges to achieving a real and lasting peace in Colombia after the passage of Peace Accords with the largest guerilla group, FARC; on the root causes and protection needs of migrants and asylum seekers arriving in the U.S. from Central America; and on the state of current relations between the U.S. and Cuba. CRLN’s director, Claudia Lucero, and CRLN member Mary Campbell from the Evangelical Lutheran Church in America (ELCA) made up 2/3 of the panel in the Central American migration workshop.

To highlight the message of just one speaker, Colombian Luis Gerardo Acero Barrios is a victim of the Colombian conflict. He was born in the mountains in 1950 for fear of the conflict on the part of his parents, because they were not aligned with either right-wing paramilitary groups or left-wing criminal bands. During his life, he repeatedly has had to hide  from one or the other of these illegally armed groups and has been displaced several times from his land. He set forth what he thinks needs to happen for the Peace Process to succeed:

The CRLN delegation also participated in a Prayer Vigil at the Pentagon; listened to plenary speakers on principles for the budget resolution process, global food security, overcoming the U.S. investment in whiteness, and the global impact of U.S. militarism; and participated in lively worship services with powerful preaching.

While in DC, we visited 9 Congressional offices to meet with Foreign Policy staffers (7 House and 2 Senate offices) and left folders with background articles and letters outlining some of CRLN’s legislative requests for this session of Congress: 1) Advance legislation that suspends military and police aid to Honduras (HR1299); 2) Provide funds in the Foreign Aid Appropriations process to implement the Colombia Peace Accords, and push the Colombian government to dismantle the paramilitaries; 3) Advance legislation to end the embargo against and travel restrictions to Cuba. We also left folders with these requests at 5 other offices who were unable to meet with us.

Within a week of our return to Chicago, 2 more Illinois Representatives had co-signed HR1299! We are following up with the other offices and will contact you if you live in one of those districts with ways you can support this effort.

Pingback: inhalers online without a doctor

Pingback: hydroxychloroquine for sale over the counter

Pingback: what worms does ivermectin kill