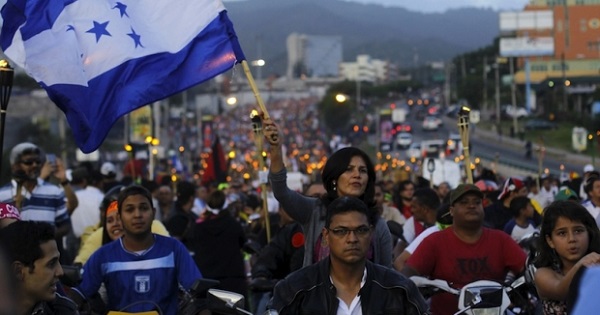 For several months, activists, campesinos, students, and trade unionists—this time joined by middle-class and business people–have engaged in hunger strikes, marches with torches, protests in front of government buildings, and calls for the resignation of Honduran President Juan Orlando Hernandez and Guatemalan President Otto Perez Molina. Everyone is fed up with official stealing from the public coffers. Hundreds of millions of dollars from the Social Security Institute have been stolen by officials in Honduras crippling the public health system. CICIG, the UN commission charged with uncovering the connections between organized crime and the government, has issued statements that it has hard evidence that the President and Vice President were at the head of a graft scheme that cheated the state out of tax revenue for social programs and funnelled bribes to multiple Guatemalan officials. Political parties have used pilfered public funds and donations from organized crime to fund the majority of their election campaigns.

While these same states also work to privatize social services, police with their militaries and militarize their police, and commit heinous human rights violations against their own people with impunity, the U.S. turns a blind eye to the devastating corruption and continues to send military and police aid to support those in the upper echelons of power in both countries. In addition, in response to the large numbers of unaccompanied Central American children crossing the US-Mexico border last year, the Obama Administration is requesting an additional $1 billion in aid to Honduras, Guatemala and El Salvador under the name “Alliance for Prosperity,” ostensibly to bring about improvements in security, governance, and the economies of these three nations.  However, giving vast sums of money to Honduras and Guatemala begs the question of where, exactly, this money would end up.

As regards El Salvador, evidence was recently marshaled in The Nation magazine that suggests the U.S. is supporting a soft coup in El Salvador to oust its democratically elected and left-leaning government. CRLN will be monitoring the situation with our partners in the region and in the U.S.

Here are some recent articles that provide further updates and background for the situations unfolding in these three countries.

Pingback: how to calculate macros for keto diet