In “Deported to Danger: United States Deportation Policies Expose Salvadorans to Death and Abuse,” Human Rights Watch (HRW) shares the results of its investigation into what happens to Salvadorans seeking asylum who are nevertheless deported back to El Salvador. Here’s a quick summary of what they found:

Here is the link to the full report: https://www.hrw.org/report/2020/02/05/deported-danger/united-states-deportation-policies-expose-salvadorans-death-and

The U.S. now has a cap on the number of  refugees allowed into the country, and much lower percentages of them are actually receiving asylum in response to their petitions.

We had a very short timeframe–2 days–to get U.S. Representatives from Illinois to sign a letter asking the Department of Homeland Security to end the mis-named Migrant Protection Protocols, which forces asylum seekers to wait in Mexican border cities indefinitely until their court cases come up. Now the deadline to sign has been extended until tomorrow, February 7!

Thanks to your calls, 9 Representatives from Illinois have signed on so far: Rush, Kelly, Garcia, Quigley, Danny Davis, Krishnamoorthi, Schakowsky, Foster, and Bustos. Please call and thank them if they are your Representative. Rep. Schneider’s staffer has contacted CRLN to say that they will have an opportunity tonight to put the letter before him, and they expect he will sign. We will keep you posted on his action. If your Representatives are Lipinski, Casten, or Underwood, or any of the Republican Representatives, please call again and emphasize that it is horrific that our country is forcing people who fled danger once to wait in areas without sanitary facilities, access to food and water or proper shelter, and where they are subjected to violence, extortion and kidnapping by organized crime.

When CRLN made calls from our office, many Congressional staff people thanked us for flagging the letter in what was a very busy week full of other nationally televised events: the Iowa Caucuses, the State of the Union Address, and the final day of the Senate impeachment trial.

Now we need to make an effort to get these same Representatives and more to sign onto H.R. 2662, the Asylum Seeker Protection Act, which would defund this cruel “Remain in Mexico” policy. So far, only Garcia, Schakowsky and Schneider have signed. If you are represented by one of these 3, please call and thank them. If not, please call your member of Congress and ask them to co-sponsor H.R. 2662. 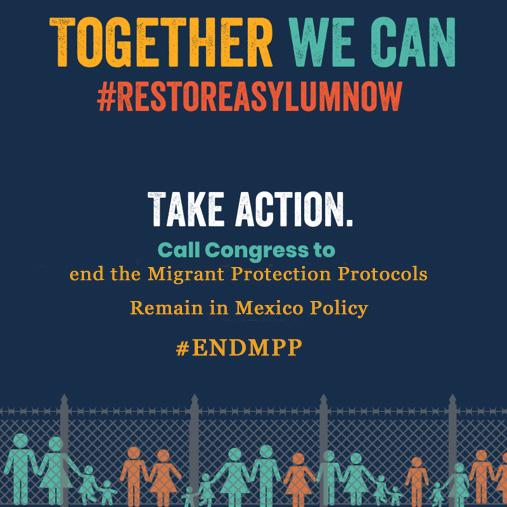 The so-called Migrant Protection Protocols (MPP) implemented by the Trump administration since January 29, 2019 have been in place for a year, and we have seen the disastrous results. We are alarmed that 60,000 people,having fled life-threatening situations in their home countries and having experienced trauma on their way north, have attempted to seek asylum in the U.S., only to be told that they must fend for themselves in Mexican border cities until their court case comes up, usually 6-8 months later. Organized crime, which has preyed upon migrants for years, poses a grave danger for these asylum seekers. In addition, they live in precarious conditions, with little access to food, water or shelter; no sanitation services; very few doctors available on site to provide medical care; and no access to U.S. lawyers who could represent them in their asylum cases.

A Congressional delegation went to the Texas-Mexican border to provide oversight of the MPP. Click here to read what they found.

We must act to end this inhumane and dangerous policy! Please call the U.S. House Switchboard at (202) 224-3121, ask to be connected to your Representative’s office (If you don’t know the name of your Representative, click here), and ask them to co-sponsor H.R. 2662, the Asylum Seeker Protection Act, which would defund the MPP. Leave your phone number or email address and ask the office to let you know whether the Representative has signed or not. Let them know you are tired of hearing politicians portray all migrants, refugees, and asylum seekers as murderous criminals, and that you see them as community members, neighbors and friends.

If you receive a response from your Representative’s office, please call the CRLN office (773-293-2964) or email shunter-smith@crln.org to let us know. We will be following the progress of this House Resolution.