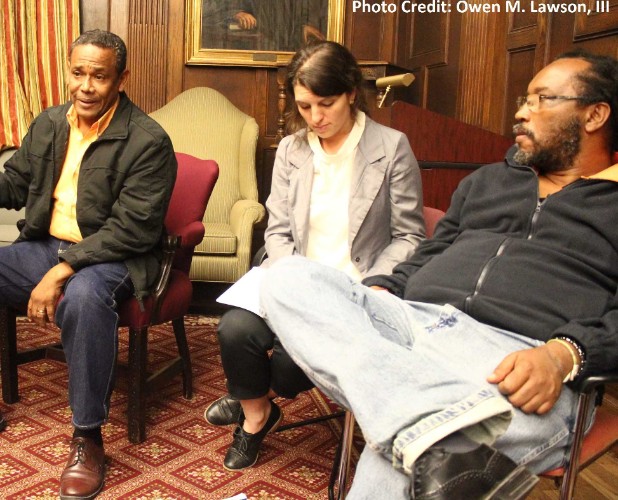 Carlos Rosero and Javier Marrugo of the Afro-Colombian Peace Council speak in Chicago about the importance of inclusion of African descendants in peace talks and Peace Accord implementation.

Last week, Colombia’s President Juan Manuel Santos met with President Obama to discuss a bilateral shift from 15 years of Plan Colombia to what the two heads of state are calling “


.” For the past decade and a half, Plan Colombia channeled billions of U.S. dollars to shore up Colombia’s military and police resources, more deeply militarizing the Colombian state’s strategy to fight a nominal war on drugs which displaced violence to the countryside and disproportionately affected

Santos and Obama also discussed the grueling, decades long conflict in Colombia between the government, right-wing paramilitary groups, and leftist rebels which is likely to end in the coming months due to intense negotiations over the past several years through peace talks in Havana, Cuba. The Revolutionary Armed Forces of Colombia (also known as FARC) reached an agreement


with the Colombian government


on a peace accord that could end the longest running civil war in the hemisphere. The talks have included the topics of the political participation of the FARC, drug-trafficking, the fundamental issue of the distribution and ownership of land in Colombia, the rights of victims, and the conditions for insurgents to turn in their weapons.

While the peace negotiations have been a crucial part of social movements’ strategy to mitigate the brutal violence (in fact, social movements, many of whom reject electoral politics, actually supported President Santos’ re-election with the goal that he would finalized the negotiations within his second term), Colombian organizers are not under the illusion that the accords nor the new “Peace Colombia” will bring fundamental peace to country, much less to the communities disproportionately affected by the violence (women,

, African descendents and Indigenous peoples). We’ve heard over and over again that the peace accords will provide a pathway to peace, but that implementation, inclusion and accountability will be required if peace can ever become a fundamental reality.

Two pathways forward are crucial in this historic moment in Colombia:


First, regarding the implementation of the Peace Accords,


when over 3,500 were assassinated. Stay tuned to CRLN’s website and facebook to stay up-to-date on our work to continue accompanying and supporting marginalized communities in Colombia during a transformational moment in their country’s history. And


Second, regarding the new version of Plan Colombia now being called “Peace Colombia,”

it is crucial that the U.S. stop using its billions of dollars in aid to continue militarizing a country that is working to implement peace. CRLN partner organization the Washington Office on Latin America (WOLA), has provided


for shifting the policies of Plan Colombia away from militarization and towards the interests of those most directly affected by violence. Meanwhile, the national office of School of the Americas Watch (SOA Watch) is planning an investigatory delegation to the Panamanian border of Colombia where the U.S. is supporting the construction of yet another military base in an isolated and predominantly Indigenous and Afro-Colombian territory. The Illinois chapter of SOA Watch is


to help fundraise in support of this delegation’s investigation of the ongoing militarization schemes during the ‘new’ era of “Peace Colombia.”


Click here to join a team and support this international organizing right from here in Chicago!