Thanks to all those who participated in Days of Prayer and Action for Colombia. This year, nearly 500 faith leaders representing approximately 20 denominations from the U.S. and Colombia sent a letter to members of Congress, urging them to end military aid and aerial spraying and to oppose the U.S.-Colombia FTA.  If you’re active in your faith community, feel free to share it there.

You can also send it to your Senators and Representative with a short cover note, asking them to reduce military aid to Colombia in the upcoming foreign aid bill.  To keep your members of Congress informed, click here

In the letter below, over four hundred church representatives-representing over 4.3 million Protestant, Catholic and Evangelical churchgoers and 20,000 congregations in the United States and Colombia-write to Congress to express their views on U.S. military and socio-economic assistance to Colombia as well as the pending U.S.-Colombia free trade agreement.

The letter’s signatories call on Congress to:

• Further cut U.S. military aid to Colombia and aerial fumigation, which does not bring Colombia closer to peace, while significantly increasing aid for the poor, the displaced, refugees and the victims of Colombia’s armed conflict.

• Insist that the State Department strongly enforce the human rights conditions in law, key today due to an increase in killings of civilians as well as other human rights violations attributed directly to the Colombian Armed Forces.

• Do not ratify the U.S.-Colombia Free Trade Agreement, which would increase the already concerning poverty rate among rural Colombians, would put Colombia’s food security at risk and lacks sufficient protections for workers and Colombia’s bio-diverse environment.

U.S. and Colombian Church Leaders Call on Congress to Substantially Reduce Military Aid, to Strengthen Human Rights Protections and to Vote No on the U.S.-Colombia FTA.

And the work of righteousness shall be peace;

and the effect of righteousness quietness and assurance for ever.

We, the undersigned, are U.S. and Colombian people of faith, convinced that God calls us to be on the side of the weak, the victims and the poor. For this reason, as representatives of numerous faith communities and churches, we come to you because we understand that soon you will consider two pieces of legislation that would have a significant impact on Colombia-U.S. military and social assistance through Plan Colombia and the U.S.-Colombia Free Trade Agreement. We write in the hope that your decisions may build the foundation for dignified life for all and promote the justice and peace that we so desire.

For more than 50 years Colombia has suffered through armed conflict, violence, inequalities and injustices. The civilian population is most affected by the armed conflict. More than four million people have been displaced from their lands. This conflict kills more than 3,000 people annually and tens of thousands of paramilitary and guerrilla victims today call for truth, justice and reparations. Meanwhile, the United Nations indicates that more than 45 percent of the Colombian population lives in poverty.

We have closely followed the congressional debates regarding human rights in Colombia and the balance between U.S. military and social aid for Colombia. We applauded Congress’ achievement last year when you cut $142 million in military aid and added $97 million in social aid to the aid package. We know that this year President George Bush has once again called on Congress to pass an aid package with approximately 75 percent in military aid. We, who work with the victims of the conflict or accompany them from the United States, hope that Congress prioritizes work for peace and socio-economic assistance rather than military aid.

At the same time, we know that Congress may soon consider the ratification of the Free Trade Agreement negotiated between Colombia and the United States. Being faithful to our principles, we must view any public policy from the point of view of the poor and the victims. Therefore, in Colombia we must consider how the trade agreement would affect what the United Nations estimates are the close to nine million Colombians living in rural areas-the family farmer, the indigenous and the Afro-Colombians-80 percent of whom live in poverty, according to USAID.

According to the United Nations, 21 percent of employed Colombians work in agriculture, the vast majority in rural areas. Research on the impact of free trade agreements between underdeveloped countries, such as Colombia, and countries with large economies, such as the United States, show that underdeveloped countries lose a significant number of agricultural jobs. For example, independent studies indicate that in Mexico at least 1.3 million family farmers have been displaced from their agricultural production due to subsidized imports from the United States.

While in Mexico many of these family farmers have attempted to survive by migrating into the United States, in Colombia there would be a risk of increasing the number of internally displaced persons, a population that is already the second largest in the world. We are deeply concerned that the livelihood of the rural population-individuals who have already suffered greatly from the consequences of the armed conflict-would be further put at risk by this trade agreement. This population could then face decisions that have historically reproduced violence and poverty in Colombia: migration to urban settings, forced internal displacement, illicit crop production, recruitment by illegal armed groups, among other ill-fated consequences.

We are also concerned that the U.S.-Colombia Free Trade Agreement would put Colombians’ food security at risk, as the country would, in large part, be dependent on U.S. imports for basic grains and other key foods for daily consumption. Furthermore, this trade agreement does not have sufficient protection for workers nor the environment. Such labor protections are particularly important in Colombia, the country with the highest number of murdered trade unionists. And without necessary environmental protections in the agreement, we would be jeopardizing Colombia’s environment, considered the second most bio-diverse in the world.

Further cut U.S. military aid and aerial fumigation, which does not bring us closer to peace in Colombia, while significantly increasing aid for the poor, the displaced, refugees and the victims of the armed conflict.

Insist that the State Department strongly enforce the human rights conditions in law, which is especially important as we are seeing a concerning increase in killings of civilians as well as other human rights violations attributed to the Colombian Armed Forces.

Do not ratify a U.S.-Colombia Free Trade Agreement, which would increase the already concerning poverty rate among rural Colombians, would put Colombia’s food security at risk and lacks sufficient protections for workers and Colombia’s bio-diverse environment.

Esteemed members of Congress, we ask that you consider our concerns in order to find the authentic paths for justice and peace for Colombia, the United States and the world.

* For identification purposes only.

From May 16 – June 6, 2017, 89 civil societies in the port city of Buenaventura called for an indefinite general strike, demanding the Colombian government provide basic infrastructure (such as sanitation, housing and clean water), public services (such as education and health care), and creation of dignified jobs. Over 80% of the residents in the largely Afro-Colombian population live in economic poverty without these public goods and services, in spite of the fact that Buenaventura is Colombia’s most important international port that generates billions of dollars of revenue. However, neoliberal privatization of the port slashed wages and put profits largely into the hands of private owners, and expansion of the port destroyed the coastal mangroves that were spawning sites for fish, ruining fishing as an occupation. The strike addressed years of government abandonment, lack of investment, and structural racism.

The strike was extremely well organized, disciplined and peaceful, and they used blockades to shut down truck traffic to the port until the government would negotiate in good faith with them.  In contrast, instead of negotiating in the beginning, the government sent in the Anti-Riot Unit of the National Police (ESMAD), which on May 19th used gas, helicopters, stun bombs, tanks, and firearms against a peaceful blockade that included children, pregnant women, youth and elderly people. In subsequent days, ESMAD started firing teargas into residential areas of vulnerable populations who live in wooden houses on stilts, where teargas easily entered and threatened to asphyxiate especially babies and young children.

In a press conference on June 1, human rights defender and member of Proceso de Comunidades Negras (Black Communities Process, or PCN), Danelly Estupiñan asserted “we reject the Colombian State’s military response to an issue that could have been resolved by political means, it’s as if social protest were a crime.”

The Afro-Colombian population stuck to their strike, and the government finally had to negotiate with the strike committee, reaching an agreement on June 6.  CRLN Board member Eunice Escobar, who is from Buenaventura, kept CRLN apprised of the situation and reported that the agreement has four important components:

1. The creation of a special autonomous fund with resources that are considered the patrimony of the people in Buenaventura, coming from 50% of business taxes levied on companies profiting from activities related to the port, plus $76 million dollars that the government will raise from credits with international banks, regulated by a law that should be signed in July.

2. An initial investment of COP$1.500 billion to attend to immediate needs in basic infrastructure for water, health and basic sanitation services in rural and urban areas.

3. An integral development plan for the city that includes policies and programs, institutional reform and community participation to make Buenaventura a port for the people and not simply for profit.

4. The proper investigation, prosecution and sentencing of those in the state riot police who used violent tactics to break up a peaceful protest, dropping of charges against protesters who have been criminalized, and ensuring security and protection for the many leaders that guided 22 days of this peaceful, organized and successful strike.

CRLN will keep you posted on how well the Colombian government lives up to its promises. We congratulate the many organizations who insisted that the government fulfill its responsibilities to the people of Buenaventura.

Below is an article on the strike: 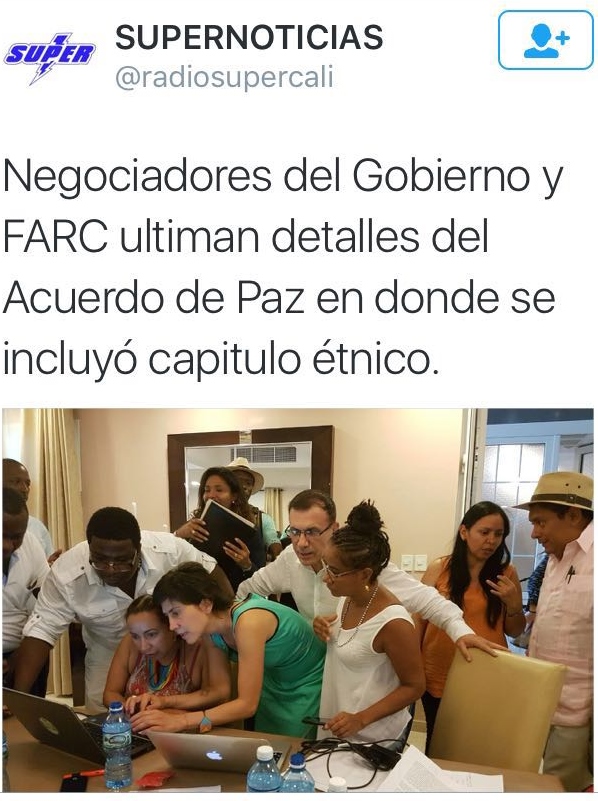