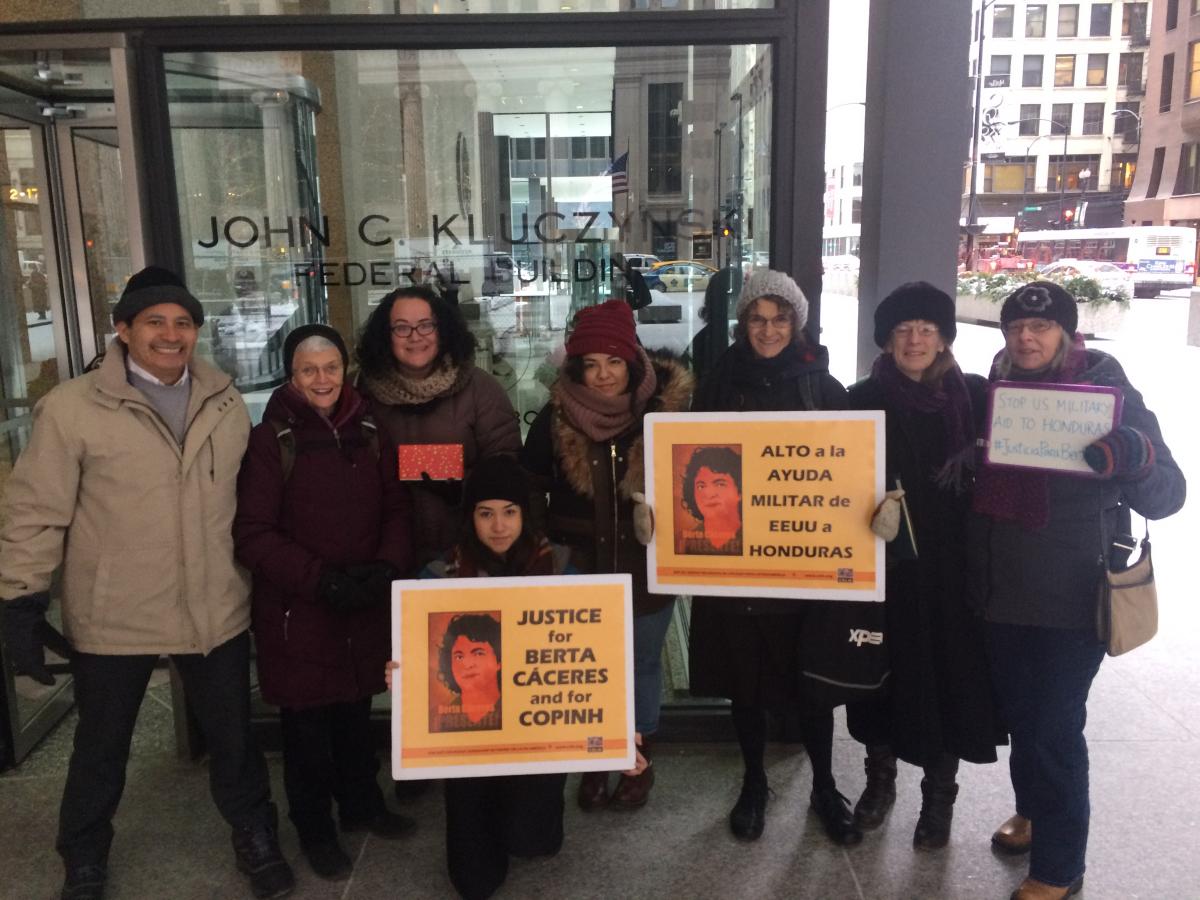 CRLN members and many friends stepped up to sign letters to Senator Durbin, a high ranking Senate Appropriator and the Chairman of the Appropriations Committee’s Subcommittee on Defense, who has the power to suspend security aid to Honduras given the grave and consistent state-sponsored human rights violations in that country. Our folks met briefly with Senator Durbin’s staff who expressed concern with the situation and who ensured us that they would give the Senator our message. At this time, they were unable to give us a definitive answer about withholding security aid. We will continue pressuring Senator Durbin into 2017 and we expect to work hard to win support from Senator-elect Duckworth as well.

The 200 signatures delivered to Durbin also appeared on letters to Illinois members of the House urging that they support H.R.5474, the Berta Cáceres Human Rights in Honduras Act, a bill that would also suspend U.S. security aid to Honduras. At this time, seven out of ten Democrats in the Illinois delegation have decided to cosponsor the legislation, a major win that would not have been possible without grassroots pressure from those who signed.

Berta Cáceres, co-founder of the Civic Council of Popular and Indigenous Organizations of Honduras (COPINH), was assassinated on March 2nd, 2016 and in the nine months that have passed since her murder, her case files have been stolen and her family has been kept in the dark about the judicial process. In July, COPINH member Nelson Garcia was murdered and Tomás Gomez Membreño, COPINH’s current General Coordinator who visited the Senator’s office asking that he withhold security aid in June 2016, recently survived an assassination attempt.

In October, Jose Angel Flores, President of the campesino organization MUCA (Unified Campesino Movement of the Aguan) and Silmer Dionosio George, another MUCA leader, were killed by gunmen as they left a meeting of MUCA members. More activists and human rights defenders were illegally detained and threatened by Honduran security forces while peacefully protesting highway privatization. The latest report on Human Rights in Honduras from the Association of Citizen Participation reported that in 2016 there were 32 assassinations of human rights defenders, environmental activists, and Indigenous and rural farmer defenders.

Despite these ongoing attacks, credible accusations of Honduran state complicity, and an ongoing 95% impunity rate, the U.S. has sent over $200 million in police and military aid since the 2009 coup and, last month, the State Department certified—with little to no evidence—the Honduran government for having met human rights conditions, thus releasing $55,000,000 in security aid.

In response, roughly 200 Illinois residents were represented in the December 16th holiday post card delivery urging the Senator to use his, “power to suspend security aid to Honduras until their police and military demonstrate compliance with international human rights standards. Our tax dollars can no longer provide Honduran security forces with both the material resources and international legitimacy to commit human rights violations with impunity.”

While the 114th Session of Congress has adjourned for 2016, we will continue supporting our partners in Honduras and pressuring Senator Durbin and all of our elected officials to suspend U.S. security aid and to respond to the ongoing assassinations of and violence against human rights defenders in Honduras.