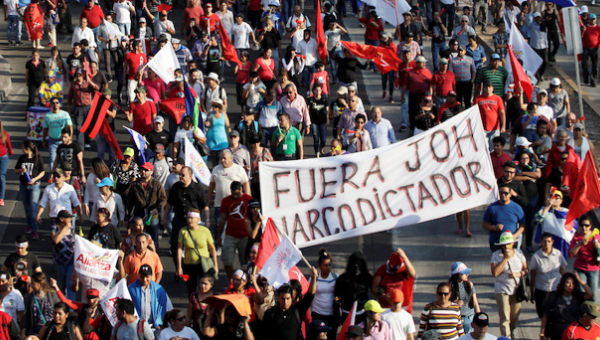 Enough is Enough — Stop all US and Canadian support for dictatorship in Honduras. Support the Honduran people in resistance. Call and/or email your Congress Representative, Senator or Parliamentarian today (May 31). Tell them you want them to take a position against the human rights violations in Hondurans and against US funding and support for Honduran security forces that are being used against the people.

The Honduran people are in the streets by the thousands again facing US financed, armed and trained Honduran Police and Military. A two day national action and strike for May 30-31 was originally called as a  protest in defense of public education and public health in the face of new attacks on public services by the regime of Juan Orlando Hernandez (JOH). Today’s protests covered the entire country and not only defended public services but once again called massively for the end of the illegitimate government of JOH — a government that has been imposed and sustained by US and Canadian support. There are marches, highway take-overs in the rural areas, occupations of public schools by parents and students, mobilizations of teacher and health care worker unions, campesinos, indigenous communities, taxi drivers and university students. The protests are becoming a non-violent uprising of the people against the dictatorship but are being met with violence, tear gas and live ammunition from the regime. One teacher was assassinated in his home the night before these national actions began, another teacher and a student were wounded today by police.

Since the most recent electoral crisis of November 2017 in which JOH was imposed on the people through fraud and violence, security forces have killed more than 20 people and many more, including at least 15 ? journalists have been assassinated by death squad style killings. Since the 2009 coup, also heavily backed by the US and Canada, hundreds of Hondurans have been killed by security forces and paramilitary type groups. Many hundreds more have been killed by narcotics cartel linked violence while the ruling party politicians, including JOH himself and his brother have been either charged or are under investigation for being part of the narcotics cartels. Link to article

Enough is Enough — Stop all US and Canadian support for dictatorship in Honduras. Support the Honduran people in resistance. Call your congress representative, Senator or Parliamentarian today (May 31).