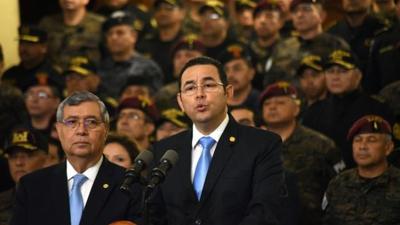 Guatemala is at a crossroads. President Jimmy Morales, backed by the military, has disobeyed the orders of the highest court and will kick out of the country a UN-backed commission battling corruption, impunity, and criminal networks…and unlike many others in the international community, the U.S. is not speaking out against his words and actions. Click here to respond to an action alert from Guatemala Human Rights Commission/USA to call on the State Department to strongly support the independence of the Constitutional Court

For the last 12 years, the International Commission Against Impunity in Guatemala (CICIG, for its Spanish acronym), in cooperation with the last two Guatemalan Attorneys General and the Constitutional Court, has reduced the impunity rate from over 95% to 72% and battled to dismantle hidden criminal networks that have infiltrated all branches of government and security forces. They have investigated and secured the conviction of two former presidents and advanced court cases against some of the highest level military and government officials who perpetrated genocide against the Indigenous peoples and “disappeared” non-combatant Guatemalan civilians during the civil war. However, hidden criminal networks remain entrenched. The U.S., to its credit, has supported CICIG’s efforts with $42.5 million since its inception, but it looks like that support may end.

This year, CICIG accused current President Jimmy Morales of corruption. On August 31, he announced he would not renew CICIG’s mission and gave CICIG one year to leave the country. Dozens of security forces stood behind him as he spoke. U.S.-donated army vehicles with mounted machine guns were deployed to CICIG’s headquarters. September 5, Morales banned the head of CICIG, Ivan Velasquez, from re-entering Guatemala, ignoring an order from the Constitutional Court not to interfere with CICIG’s work. U.S. Secretary of State Mike Pompeo called President Morales to say that Washington supported Guatemala’s sovereignty and would work with Guatemala to “reform” CICIG. It is pretty clear to CRLN that it is the Guatemalan government, military and police that need reform–not CICIG,

Click here for a New York Times article about the situation.