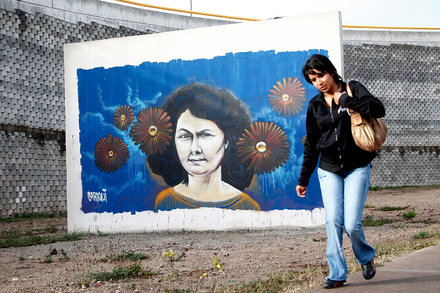 Rep. Hank Johnson reintroduced the Berta Caceres Human Rights in Honduras Act in the 115th Congress as House Resolution 1299 (HR 1299) on March 2, the first anniversary of the slain indigenous rights, feminist, and environomental activist. The bill would suspend all U.S. military and police aid to Honduras, including equipment and training, until basic human rights conditions are met. The Honduran police and military have been implicated in hundreds of human rights violations since the 2009 overthrow of the government, and we should not be supporting them with our tax dollars.

. Already, Representatives Schakowsky, Lipinski, Gutierrez, Rush, and Davis from Illinois have signed on to co-sponsor. Here are three good reasons you might give us permission to sign your name on a letter to your Representative in support of this resolution, which CRLN staff will deliver when we are in DC for Ecumenical Advocacy Days:

are under constant threat of violence,

and we in CRLN want to do everything in our power to send the message that they have international solidarity in these dangerous times. There have been credible allegations by an army defector of the existence of death squads within the Honduran military who have received U.S. training and who have a hit list of prominent social movement leaders. We need to stop U.S. training that results in assassinations.

The current President, Juan Orlando Hernandez, and his administration and political party are riddled with corruption. He has been named by a drug trafficker leader on trial in New York as receiving bribes from his cartel, with Hernandez’ brother acting as liaison

. His National Party stole hundreds of millions of dollars from the national health insurance system to fund his first campaign. He will run again for President this fall, which violates the Constitution; and he fired four Supreme Court justices who objected and appointed four who were in favor of his re-election bid in order to be able to run again. The U.S. should not reward with funds someone who seems willing to benefit himself at the expense of his country.

For further reading, here are some recent articles on Honduras:

By Berta Caceres’ nephew on the anniversary of her assassination:

By Steven Dudley of InSight Crime on Honduran presidents’ link to gangs:

Another Day, Another Damning Testimony of Elites by Honduras Trafficker