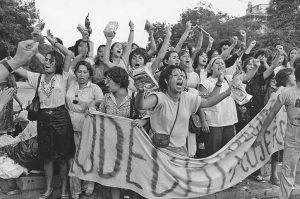 Women soaked by water cannon during a demonstration against Pinochet on International Women’s Day in Santiago. Photograph: Julio Etchart/Julio Etchart

This week, CRLN joins millions of people around the world commemorating the 40th anniversary of Chile’s U.S.-backed military coup, which led to 17 years of dictatorship and tens of thousands of opposition activists murdered, disappeared, tortured, exiled, and imprisoned. Time has healed some, but also brought profound determination for truth and justice.

“As more time goes by, the truth of what happened and the full dimension of the violence becomes even clearer, and the country’s institutions are forced to assume their responsibility.”

Argentine-Chilean novelist, playwright, essayist, academic, and human rights activist Ariel Dorfman writes in the New York Times about how he survived the bombing of the presidential palace just by trading a shift with a colleague and friend. He also writes about the durable impacts of the coup that have spread throughout the globe:

“The most lasting legacy of Chile’s Sept. 11 were the economic policies implemented by Pinochet. My country became, in effect, a laboratory for a neoliberal experiment, a land of  unrestrained greed where extreme denationalization of public resources and suppression of workers’ rights were imposed on an unwilling populace. Many of these merciless policies were later deployed by leaders across the globe”.

“who has just filed a civil lawsuit in U.S. court against the former military officer who allegedly killed Jara 40 years ago. Jara’s accused killer, Pedro Barrientos, has lived in the United States for roughly two decades and is now a U.S. citizen.”

Jara’s family is suing him under federal laws that allow U.S. courts to hear about human rights abuses committed abroad.”

TAKE ACTION! and join SOAWatch in calling for accountability for Victor Jara’s murder by Pedro Barrientos : “Jara was first held and tortured in the  infamous Estadio Chile (since renamed Estadio Victor Jara), which was turned into a nightmarish detention and torture center after the coup. Survivors and other witnesses claim that military officers broke Jara’s hands with the butts of their rifles before mockingly asking him to play his famous songs. Defiantly, Jara sang part of ‘Venceremos’ (We Will Win). His body was later dumped in the street, found riddled with 44 bullets and signs of extensive torture.”

Read a recounting by Hugh O’Shaughnessy, a prize-winning journalist who has written on Latin America for over 40 years, of the days immediately before and following the coup in Chile, where he was working as a journalist:

“As had already been the case after the military coups in Brazil in 1964 and then in Uruguay, Paraguay, Bolivia and Argentina, and as was to be the case latterly in modern Iraq, Afghanistan and Guantánamo Bay, the military and police torturers were ready with their electrodes, thumbscrews and waterboarding equipment to defend ‘western Christian civilisation’.”

Many had been brought to a peak of perfection in their
trade in the US itself or in its bases in the Panama canal zone by US instructors.”