Globalizing the Struggle, From Ferguson to Colombia: State Violence and Racialized Oppression Know No Borders

Article by CRLN staff member, Celeste Larkin and Chicago organizer, Martin Macias, published on truthout about a mostly people of color delegation to Colombia to visit African descendant communities organizing for their autonomy, land and lives. Celeste and Martin report back from their trip and explore what it means to be in solidarity with the communities they met in Colombia.

Globalizing
the Struggle, From Ferguson to Colombia: State Violence and Racialized
Oppression Know No Borders 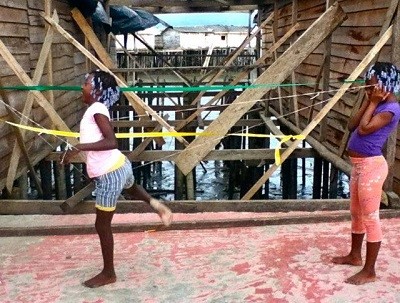 Children from the community of La Playita play across from the site of where paramilitaries would torture and brutally dismember residents. Residents tore it down and built a community center next door.

For decades, Afro-descendant
communities in Colombia have fought for autonomy and self-determination as a
response to government policies that produce multiple forms of violence in
their communities. Fully aware of, and in solidarity with, mobilizations in
Ferguson, Afro-Colombians recognize the common dreams of movements for racial
justice for people of color people across the hemisphere. Two members of a
delegation that visited these communities in August 2014 reflect on their own
solidarity process and explore the ways that transnational solidarity manifests
(or doesn’t) in movements. How can we move beyond allyship and towards a
practice of co-struggling?

One week after Michael Brown was
murdered in Ferguson, nine US-based activists and artists of color and one white
woman traveled to meet racial justice movement leaders in Colombia. Our
delegation was led by

(PCN, Black Community Process), a collective of African-descendant Colombian groups focused
on cultural and political power for Colombia’s black population. The history of
dispossession is a long one for African descendants in Colombia and across the
diaspora i.e. European colonial conquests, subsequent violent and dehumanizing
economies of enslavement, the state’s denial of social services and
reparations. With the energy of the #BlacksLivesMatter mobilizations flowing
through our hearts and minds, we began our weeklong human rights delegation
throughout the Southwest Valle de Cauca region of Colombia.

Communities in that region have
experienced displacement and disenfranchisement (and/or the threat of them) for
decades as a result of large-scale infrastructure development, tourism
expansion projects and agricultural policies that favor production of export
crops (mainly sugar cane) over domestic food production. Some communities are
actively resisting illegal mining operations that destroy and usurp their
ancestral territories. Residents are actively resisting the destruction/capture
of their land which comes as a result of illegal mining operations. The
directors of these illegal enterprises operate with impunity – which is further
demonstrated by their use of paramilitary forces to threaten or assassinate
community leaders.

shalt give unto him. And thou shalt
remember that thou wast a bondman in the land of Egypt, and the LORD thy God
redeemed thee: therefore I command thee this thing today.

It’s with this Biblical passage that
Ta-Nehisi Coates started his crucial essay, ”

The Case for Reparations

The passage has very real implications: if a person or community has been
subjected to a traumatic period (or century) of bondage and dispossession, it
would be unjust and ahistorical to expect that they can immediately begin a
productive, happy life with such a deficit in power, resources, and
self-determination. Indeed, the historic and collective dispossession of
Afro-Colombians must be reconciled through amends and reparations, or the
imbalance of power at all levels of society will continue and their newfound
“equality” will be nominal only.

Yet instead of redistributing the
wealth created off the backs of generations of people of color and through
racist and violent projects of dispossession, the US government has
successfully streamlined capital and resources into the lucrative projects of
the military industrial complex which has been utilized to maintain order more
than protect and serve. The racialized patterns of criminalization within this
environment of military build-up have created an era wherein the bodies of
people of color are treated as criminal until proven innocent. And it is within
this setting of very immediate violence and years of residual trauma that
Coates’ call for reparations historicizes the urgency for fundamental changes
for communities of color.

973 thoughts on “Globalizing the Struggle, From Ferguson to Colombia: State Violence and Racialized Oppression Know No Borders”