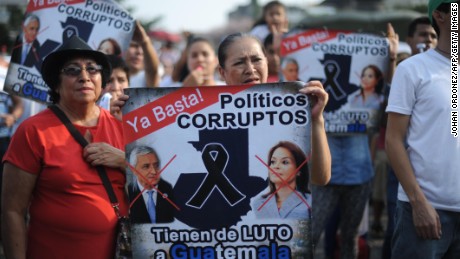 Guatemala held elections last Sunday that were marred by the interference of the powers controlling the country in the electoral process. The primary anti-corruption candidate, who had been leading in the polls, fled to El Salvador after receiving a death threat earlier in the campaign season, as did the Special Prosecutor for Electoral Crimes. The Supreme Electoral Tribunal threw various obstacles in front of one of the indigenous parties, MLP, to limit its ability to campaign and to limit the number of votes for its candidates. One of its candidates and two of its campaign committee members were murdered. Neither of the two Presidential candidates who won the most votes and will have a run-off election in September have promised to support the International Commission Against Impunity (CICIG), and so it will cease operations in September 2019.

Nevertheless, indigenous and progressive parties did better than usual in this election, and the population in general is outraged at official corruption. Below is a more detailed report on the election results by our friends at the Guatemala Human Rights Commission/USA.

Parties implicated in corruption will face off for the presidency, dominate congress

Strongest showing yet by opposition parties

As expected, Sunday’s general elections in Guatemala resulted in a run-off for the presidency between former First Lady Sandra Torres (National  Unity of Hope – UNE – party) and four-time presidential candidate Alejandro Giamattei (Vamos Party).  The Supreme Electoral Court (TSE) reports that Torres took the lead with close to 26% of the vote and Giamattei followed with just under 14%. The run-off will take place August 11. Elected candidates will take office January 14.

The TSE reports that UNE won 53 out of 160 available congressional seats, up from 28 in the last elections.  UNE’s congressional showing alone makes it the dominant political force. Vamos took 16 seats.  During the outgoing Congress, UNE often voted with the“Pact of Corrupts,” an informal coalition that promoted laws favoring corruption and impunity, of which Vamos was considered an ally.

Maya Mam community organizer Thelma Cabrera (Movement for Peoples’ Liberation – MLP – party) came in with 10.5% of the vote, making her the highest polling indigenous presidential candidate ever in Guatemala, a majority indigenous country.  She came in a close fourth place behind Edmund Mulet.  Cabrera’s newly created MLP party issued a statement late in the day on Monday, rejecting the TSE’s official reports.  The MLP reports that local TSE officials refused to provide copies of the official acts registering polling station results as required by law, in some districts the MLP’s symbol was omitted from the ballot, the TSE did not provide MLP with its legally mandated publicity budget, and the TSE blocked MLP locals from opening bank accounts.  Concern regarding electoral irregularities has been heightened since the Special Prosecutor for Electoral Crimes, Oscar Schaad, resigned his post and fled Guatemala five days before the elections in response to death threats.   Leopaldo Guerra, the Director of the TSE’ Citizens Registry, which oversees the registration of candidates, also took a leave just days before the elections citing health reasons, while the Special Prosecutor Against Impunity (FECI), Juan Francisco Sandoval, is also reported to be on vacation.

Rural political observers note that during the campaign president Jimmy Morales’ principal anti-poverty initiative, a bag of foodstuffs known as “bolsa solidaria”, was handed out in many areas by UNE political operators.  This suggests an alliance between the outgoing FCN party and UNE.  Over seventeen years and one presidency, the UNE party, created to sponsor Torres’ former husbandÁlvaro Arzú [CRLN note: her former husband was Álvaro Colom] unsuccessful 2003 presidential bid, has built a voting base in rural areas where political clientelism dominates communities plagued by extreme levels of poverty.  Analysts also questioned Giammattei’s presidential showing, noting the Vamos party had no structure in the countryside and in the city polled similarly to Cabrera and Mulet.

On February 27 the International Commission Against Impunity (CICIG) and its counterpart in the Public Prosecutors office, FECI, asked the Supreme Court of Justice to remove Sandra Torres’ political immunity, which derives from her status as a candidate, to face indictment for crimes related to illicit campaign financing during her last presidential bid in 2015.  This impeachment request is currently pending before the Constitutional Court. Torres could still face charges. Guatemalan press revealed that the charges against Torres were held up in the Attorney Generals’ Office until after she had gained immunity by registering as a candidate.

In 2009 Alejandro Giamattei faced charges brought by CICIG, he was accused of participation in death squad activities while he served as National Penitentiary Director in 2005 and 2006. After first seeking asylum in the Honduran embassy during the de facto government of Roberto Micheletti, Giamattei was acquitted in 2011 by Judge Carol Patricia Flores.  Flores is renowned for judicial acrobatics which favor impunity for corruption and crimes against humanity.  In April 2015, CICIG and FECI requested the removal of Flores’ immunity so that she could be investigated for money laundering and illicit enrichment.  Instead she was sanctioned and it was removed from presiding over a high-risk courtroom.

Sandra Torres has also been touched by prison murder scandals.  Her niece was arrested as an accomplice of Marvin “El Taquero” Montiel Marin in the prison murder of Montiel Marin’s rival, Byron Lima, for control of criminal networks in prison.  Montiel Marin is imprisoned convicted of running a drug assassin network responsible for burning a bus, killing all 26 people inside.

In keeping with past elections, TSE reported that approximately 5 million of 8 million registered voters participated and 13% voted null or left their ballots blank.  In the 2015 electoral law time nullified ballots can have legal implications; if over 50% of ballots are annulled the electoral law would mandate repeated elections.

This election was deeply impacted by court decisions.  Torres’ early challenger Zury Rios was removed from the ballot after the Constitutional Court supported the Elections Tribunal’s finding that, as the daughter of military coup author Efrian Rios Montt, Zury Rios is constitutionally barred from the presidency.  Corruption charges generally believed to be politically motivated removed another early front runner from the race, Semilla candidate and former Attorney General Thelma Aldana.  Aldana remains unable to enter Guatemala without arrest.  Mario Estrada, a lower polling candidate but who represented a significant party, UCN, was arrested in Miami on drug trafficking charges on April 17.  Despite the scandal, UCN won twelve seats in Congress.

Left-leaning opposition parties made the strongest showing since the 1950 elections spurred a CIA backed coup that led to decades of extreme violence directed against any opposition to the business-military alliance that ruled the country.  Parties identified with social demands and anti-corruption platforms took 15 seats in Congress; Semilla (7), Winaq (4), MLP (1) and URNG (3).  In the previous congress, they held thirteen seats; URNG- Winaq (3), Convergencia (3), and Encuentro por Guatemala (7).  Nineth Montenegro, human rights activist and congresswoman since 1996, was not re-elected.  Her party, Encuentro por Guatemala, did not win any seats and according to reforms in the electoral law, will cease to exist. Winaq candidate Aldo Davila on Sunday became the first openly gay man elected to congress. Sandra Moran was the first openly gay woman when she won a congressional seat in the 2015 elections on the Convergencia ticket.  She did not seek re-election. Convergencia did not win any seats in congress and will face a similar fate as Encuentro por Guatemala.

TSE results divide the remaining congressional seats between fifteen small, right wing parties.  Like UNE, they generally appear to have ties to corruption and drug trafficking networks, but are more strongly allied with the military, which seeks protection from prosecution for crimes against humanity.  Giamattei’s VAMOS party won 16 seats, while current president Jimmy Morales’ FCN party took only 7 seats.  Zury Rios’ VALOR party won 9 seats. The Humanista party, whose presidential candidate Edmund Mulet took third place with just over 11% of the vote, won 4 seats in Congress. Mulet was accused of collaborating in a child trafficking ring in the early 1980s. Mulet’s newly formed party’s founders came from the government of former President Alfonso Portillo, who served a prison sentence in New York for financial crimes. Portillo’s attempted bid for Congress was barred by electoral laws, his party, BIEN, won 8 seats.

The most significant incident reported at the polls on election day was the arrest of former General Luis Enrique Mendoza Garcia, the father-in-law of Estuardo Galdamez, presidential candidate for the governing FCN party who garnered just 4% of the vote.  General Mendoza Garcia, arrested Salama, Baja Verapaz, is charged with participating in acts of genocide against Maya Ixil communities between 1982-83.  Galdamez, a congressman representing El Quiche, also served as a military officer in the Ixil area during the genocide.  Maya community leaders and authorities from El Quiche reported with concern that during his campaign Galdamez sought to revive networks of military and former civil patrollers by promising payments to war veterans and demanding impunity for crimes against humanity committed by the military against a largely civilian population in the 1970 and 1980s.  Galdamez and seven fellow congressmen are accused of working with then Vice President Roxana Baldetti to pay fellow congressional representatives for votes on law proposals.

At least two candidates were murdered during campaigns, a mayorial candidate with the FUERZA party and a municipal corporation candidate with MLP.  The MLP also reported the murder of two campaign committee members in the Peten department.  The MLP killings are the latest in a series of murders that target successful Maya-led political projects. Thelma Cabrera represented the newly formed MLP party, the political arm of CODECA, a grassroots indigenous campesino community development organization.  A second successful community development organization, CCDA, brought important support to the Convergencia party. CCDA’s former National Coordinator, Leocadio Juracan, was a high profile congressman who from congress visibly promoted indigenous and campesino rights.

Last year, as planning for campaigns began, CODECA reported that six local leaders were murdered; the CCDA reported three. In 2019, CODECA reported the murder of a community organizer. All of these killings remain in impunity.  Cabrera’s relative success has caused reactions from the business sector. Juan Carlos Telef, president of Guatemala’s largest business association, CACIF,expressed concern that someone with Thelma Cabrera’s political perspectives could gain 10% of the vote.

Given Cabrera’s successful campaign, the increased show in congress, and the violence against MLP, CODECA and CCDA, it is concerning that attacks against parties with strong indigenous and campesino ties could increase in coming years.