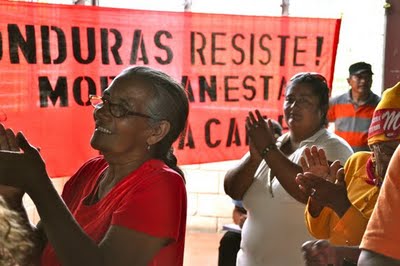 Both the U.S. and Honduran mainstream media has published misinformation about the events surrounding the coup of June 28,2009.  For example, the allegation that President Zelaya wanted to change the constitution in order to extend his time in office was invented by the coup leaders and repeated early and often.  However, President Zelaya never stated this.  The following timeline includes critical events leading up to and following the coup, including social legislation passed by President Zelaya in the months before the coup:


President Zelaya announces his intent to conduct an opinion poll to see if the people want to have a fourth ballot box installed at polling places during the next election (11/29/09).  This fourth ballot box would be in addition to the ballot boxes for President, Congress, and local officials for the purpose of holding a non-binding referendum asking people if they want the government to hold a National Constituent Assembly to draft a new constitution.


President Zelaya increases the minimum wage by 60%. Chiquita (formerly United Fruit Company) and Dole join the Honduran Business Council in complaining that this will cut into their profits and lead to mass unemployment.  However, this increase results in salaries that are still less than a third of a living wage for Hondurans.


President Zelaya issues a decree to the National Statistical Institute to hold the opinion poll on June 28, 2009.  Article 5 of the Honduran “Civil Participation Act” of 2006, approved by Congress and the Supreme Court at the time, allows public officials to perform non-binding public consultations to inquire what the population thinks about policy measures.  While the constitution can only be changed by a 2/3 majority of the Congress, Zelaya was merely attempting to gauge public opinion as an advisory measure for Congress.


The Attorney General’s office notifies Zelaya that if he proceeds with the opinion poll, he will be charged with abuse of power.


Gen. Romeo Vasquez, trained at the U.S. Army School of the Americas, tells President Zelaya that the armed forces will not distribute ballots for the non-binding referendum as ordered by the president.  President Zelaya fires him.


Supreme Court rules that Gen. Vasquez be reinstated.  President Zelaya refuses to do so, saying “If an army rebels against a president, then we are back to the era of the cavemen, back to the darkest chapters in Honduran history.”  He and his supporters go to the Air Force base to collect and distribute the ballot boxes themselves.


Early in the morning, armed forces led by Gen. Vasquez storm Zelaya’s home, disarm the Presidential guard, and fly him to Costa Rica.  The plane stops at Palmerola, a joint U.S. and Honduran military airfield.

The military patrols the streets in tanks and fly overhead in planes.  Electricity, phone lines, and international cable TV lines are cut; water is cut off to some neighborhoods; TV and radio stations supportive of Zelaya are taken off the air; and the stations still on the air report no news.

An extraordinary session of Congress is called, but not all legislators are notified or present.  There is later dispute over whether Congress had a quorum.  A fake letter of resignation from President Zelaya is read and a vote is taken to remove Zelaya from office and install Roberto Micheletti, President of the Congress, as President.  Micheletti immediately orders a 24 hour curfew for all citizens which lasts for three days.  People cannot leave their houses even to buy food or water, without fear of army retaliation.  After the third day, the curfew is suspended and reinstated arbitrarily, at the whim of the coup government, for the next several months.

The Front of Resistance to the Coup is born, a coalition of labor, farmworker, student, indigenous, Garifuna (a mixed Afro-Caribe people), and feminist groups.  People who had not been part of protests in the past join the Front’s non-violent resistance in daily public demonstrations and marches in spite of the curfew.

All Latin American countries, the European Union and much of the rest of the world unequivocally condemn the coup and call for the reinstatement of President Zelaya.  Many over the next several days recall their ambassadors and cease economic relations with Honduras.  Secretary of State Clinton, refusing to use the word “coup,” condemns the “action” taken against President Zelaya and calls on “all parties in Honduras to respect the constitution and the rule of law.”  President Obama calls Zelaya’s ouster “illegal.”  However, the U.S. does not recall its ambassador, withdraw its military personnel from Honduras, cut off aid, or cease trade relations with Honduras.


UN General Assembly calls for restitution of Zelaya as president of Honduras.


Introduced by Micheletti, Congress issues an order suspending freedom of assembly, freedom of transit, due process, and permitting search and seizure without a warrant.


President Zelaya flies to Honduras.  Crowds gather at the airport to meet him, but coup government prevents the plane from landing.  1 killed, dozens wounded.


The State Department sends a letter to the Senate to “clarify” the U.S. position on the events in Honduras.  “We energetically condemn the actions of June 28. We also recognize that President Zelaya’s insistence on undertaking provocative actions contributed to the polarization of Honduran society and led to a confrontation that unleashed the events that led to his removal.”  The State Department is still unwilling to call the events of June 28 a coup.


U.S. State Department stops $30 million in non-humanitarian aid from going to Honduras but is still unwilling to call the events of June 28 a military coup.


President Zelaya returns to Honduras secretly and takes up residence in the Brazilian Embassy.  The coup government again declares a curfew, which lasts until Sept. 23 at 10 a.m., only to resume at 4 p.m. that same day.  People are trapped in their houses, many without food or water.  Nevertheless, many defy the curfew and gather outside the Brazilian Embassy in support of Zelaya that night.


Early in the morning, police violently break up the gathering of Zelaya supporters.  Mr. Micheletti issues a secret decree suspending the constitution and civil liberties for 45 days, finally published in the government register September 26.  Campaign of harassment begun against those in the Brazilian Embassy.


Police invade the National Agrarian Institute, arresting 50 farmworkers who had been occupying the building since the coup.  The farmworkers were trying to prevent the coup government from destroying or changing land titles that were finally being registered for farmworkers under Zelaya’s land reform measures.


Assistant Secretary of State Thomas Shannon negotiates an accord between Zelaya and Micheletti, in which Micheletti agrees to let the Congress vote on Zelaya’s restoration to the presidency in return for Zelaya’s agreement that he will not seek a constitutional assembly or change the constitution, that he will support November 29 elections and encourage his supporters not to protest them in any way, that the army will be responsible for elections logistics and “keeping order” during the campaign season and on election day, and that he will participate in a “unity and reconciliation government” with those who carried out the coup.  Sec. Shannon makes clear that the expectation on all sides is that Congress will vote on Zelaya’s reinstatement very soon, by November 6 at the latest.


Congress announces it will go on indefinite recess.


Sec. Shannon announces that the U.S. will recognize the legitimacy of the November 29 elections whether or not Zelaya is restored to the presidency.


President Zelaya announces he will no longer support the accord, since the Congress shows no sign of voting on his reinstatement.

Pingback: how does cialis work

Pingback: what is levitra

Pingback: how to use cialis

Pingback: how to use cialis 20mg

Pingback: what kind of drug is celecoxib

Pingback: cephalexin is used for what

Pingback: how to order cialis from india

Pingback: when does cialis go otc

Pingback: where to buy cialis over the counter