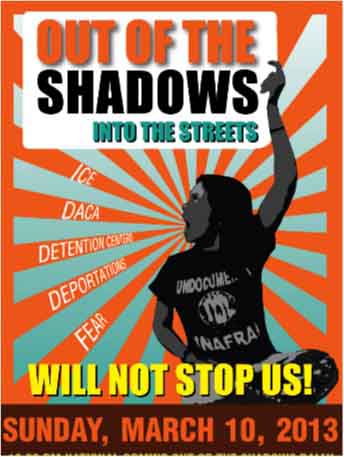 Join CNSC in this National Immigration Day of Action! On Sunday March 10th, the Immigrant Youth Justice League (IYJL) will be holding the fourth

.  First, join us for a march from Union Park starting at 11 AM. IYJL will meet in Federal Plaza at 12:30 PM for pre-rally music with Quinto Imperio, poetry, and a drum performance by the Korean American Resource Center.

At 1 PM, marchers coming from Union Park will be welcomed, and the story-sharing will begin. This year, those ‘coming out of the shadows’ will not only include youth and students, but also relatives of those in detention, immigrants facing deportation, and children whose parents have been deported, as we say together that DEPORTATION, DETENTION, and DACA will not stop us. Come be part of this National Mobilization as we keep fighting for a Compassionate and Comprehensive Immigration Reform!

Also, check out our Immigrant Welcoming Congregations Gathering Story at this

. Thank you for all those who supported this event. To find out how to get involved in the push for immigration reform contact us at