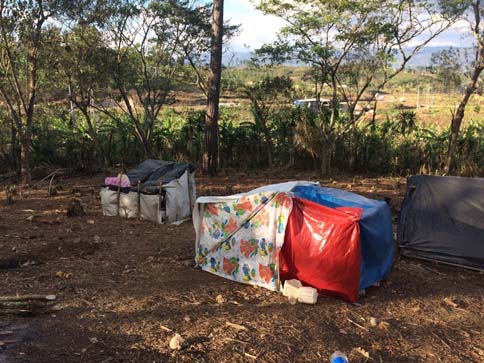 Three CRLN staff and board members traveled to Honduras February 28 – March 8 together with La Voz de los de Abajo, one of CRLN’s partner groups. Below is a reflection by Sharon Hunter-Smith upon visiting two communities engaged in land recuperation as part of the National Center of Rural Workers.


Our group from Chicago stood staring at the rough wooden table, which held 2-dozen or so spent tear gas canisters plus a couple of bullet shells, collected by the 9

of July community from the area immediately surrounding the place where we stood. The largest one, designed to be fired from a rifle, was stamped “Made in U.S.A.” The connection between U.S. military and police aid to Honduras and the violent persecution of impoverished Honduran farmers was crystal clear in the objects before us.

The original rural community of 28 families has been tear gassed and evicted from their simple hand-built dwellings and cultivated land 26 times by the Honduran military or police. In the last surprise eviction on January 13, 2017, the police followed the fleeing people, even women and children, across the valley, shooting all the way. One man was shot in the leg and a pregnant woman miscarried after running away, panicked, from the “security” forces. They also tore down and burned houses, stole or burned possessions and tools left in and around the houses, and cut down some of the fruit trees and crops. Since then, the women and children, have moved to a nearby community while the men have re-occupied the land.

“Thanks be to God that we continue to live on this land,” said one man. After each violent eviction, the community’s commitment is to return and resettle on the land within 24 hours of being pushed off, rebuilding houses and restoring crops as they are able. The bravery and endurance that this strategy demands is fed by their hope of land ownership. They experience other threats in the form of arrest warrants against them and death threats from the national or military police. “Every time we receive a group of international people who are in solidarity with us, it gives us the strength to keep going on with our struggle,” said another.

This community of formerly landless people, organized by the Central Nacional de Trabajadores del Campo (CNTC–National Center of Rural Workers), settled this abandoned and desert-like land in 2010. They dug trenches and bought plastic pipes to carry water for irrigation and drinking water from a spring 3 kilometers away. They planted fruit trees and other crops to feed their families. A dry hillside turned green and provided a way to make a living. The CNTC works with 203 other communities, like 9

of July, who are reclaiming land and putting it to good use in 14 of the 18 Honduran departments (what in the U.S. would be called states).

The National Agrarian Reform Law provides that idle land fit for farming can be expropriated and awarded to indigent and landless persons by the government, but this does not happen often. To force the issue and obtain the land essential for rural people to support themselves and their families, the CNTC works with landless people to settle and plant on unused, undeveloped or abandoned land. The occupants then file for title to the land under the Agrarian Reform Law with Honduran National Agrarian Institute (INA).

of July community is the most persecuted of all the CNTC communities, but others usually are evicted at least several times in their struggle to obtain land. How long do they have to be on the land before they are granted a title? “We don’t know with this administration. They are not on our side,” answered one man. Some of the CNTC communities have lived and worked on their land for 15-20 years and still do not have title.

Putting this into an even larger context for us, CNTC Director Franklin Almendares explained that 64% of Honduran people are rural, impoverished, and displaced or facing displacement from their land for lack of a title to it. 46% live in extreme poverty. “We are not poor—our land is rich—but we are impoverished, because they throw us off the land on which we live and farm. They want to annihilate those who speak out, who protest, who object to and challenge this system.” At the same time, Almendares pointed out, when large corporate landowners take land without having title to it, the government is complicit with their actions and grant them titles.

Visiting a second land recuperation project, CNTC organizers led us to a piece of land on a plantation that had been abandoned for decades, its owner living in Tegucigalpa.14 young men and boys, most in their teens and early twenties, had arrived on the land 11 days earlier at night.They had made pup tents from pieces of plastic and canvas held up by sticks for shelter, and had begun clearing trees so that they could begin to create fields to plant. The youngest among them appeared to be around 11 years old. They seemed wary and shy,  vulnerable and scared. Most did not talk to us, letting the CNTC organizers explain to us their situation.

All wanted to acquire some land to work on and have something to hope for. They eventually wanted to start a family and needed a way to support them. Without land, they had no hope, and without hope, they had no reason to live.

The CNTC organizers used our visit as a training for these young people—how to receive an international group, how to present themselves. They had coached the leader of the group to introduce himself with a brief description of their objectives in occupying this land. He told us that after arriving, they did not sleep for three nights, worried that the police would find them and evict them. They also had not slept outside before with insects and snakes in the area, and they were getting used to that. With encouraging words, the CNTC organizers told the group that eviction is just a passing misfortune on the way to acquiring land and homes and community. Every group had experienced this, and many had eventually earned their titles. They must work and have hope that they, too, will be successful one day, because this path is the only one that offers them any hope.

What can those of us in the U.S. do to stop the persecution of communities working with the CNTC?

Call your Congressional Representative’s office, ask to speak with or leave a message for the staff responsible for foreign policy, and request that they co-sponsor H.R. 2199, the Berta Cáceres Human Rights in Honduras Act.

This would suspend all U.S. security aid to Honduras, including equipment and training, until they cease their human rights violations. We must stop U.S. funding that enables Honduras to use violence against its own people, people who only want a chance to support their families and contribute to the life of their communities!